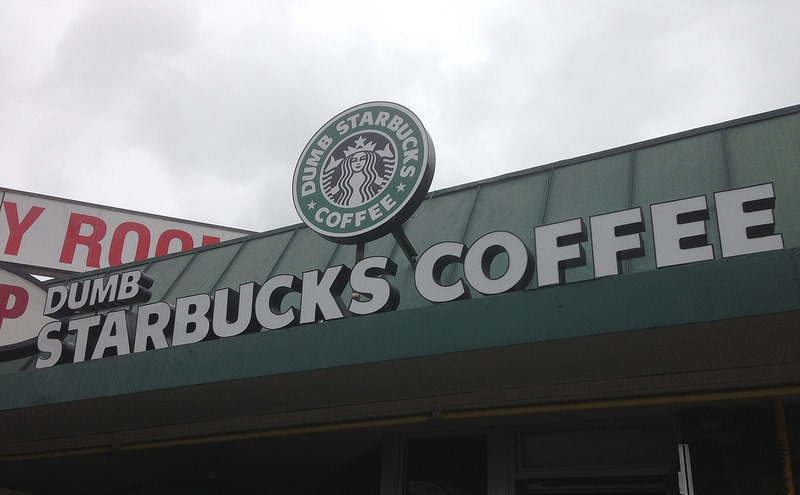 According to the blog post by Ben Fritz and Julie Jargon on the Wall Street Journal, the “Dumb Starbucks” is quite an unusual occurrence as one cannot simply label it as a “big, fat, lawsuit waiting to happen”.

How can that be? –you might be wondering. Well, since many were wondering the exact same thing and trying to figure out what the actual deal was with “Dumb Starbucks”, the owners, whoever they are, decided to print handouts and give them to customers who were slurping their “dumb coffees” in awe.

Here’s a couple of the “frequently asked questions” included in the handout:

So is this a real business?

–          Yes it is. Although we are a fully functioning coffee shop, for legal reasons Dumb Starbucks needs to be categorized as a work of parody art. So, in the eyes of the law, our “coffee shop” is actually an art gallery” and the “coffee” you’re buying is considered the art. But that’s for our lawyers to worry about. All you need to do is enjoy our delicious coffee!

Are you saying Starbucks is dumb?

–          Not at all. In fact, we love Starbucks and look up to them as role models. Unfortunately, the only way to use their intellectual property under fair use is if we are making fun of them. So the word “dumb” comes out of necessity, not enmity.

How convenient, right? And kind of funny, if you think about it, but the guys at the real “Starbucks” ain’t laughing.

“All I can say is we’re continuing to evaluate next steps,” a Starbucks spokesman said. “We appreciate the humour, but they cannot use our name – which is a protected trademark.”

So the “Starbucks” suits can’t afford to have a “funny bone”, but for those of you who do have one and are in the vicinity of the “Dumb Starbucks”, you better hurry up and grab a free T-shirt of coffee-cup before they close the place down for good!