Horror film Wolf Creek has attracted tourists from all over the world who are coming to Australia to visit the remote Wolfe Creek Crater in Western Australia. 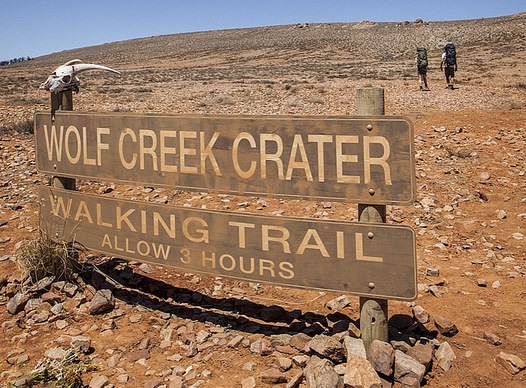 The 2005 horror film features one of the creepiest characters in Australia’s film history as he encompasses everything that most people hate. Serial killer Mick Taylor is the incarnation of the most despicable aspects of masculinity, racism, xenophobia and sexism.

A feature on ABC reveals that people are attracted to the films with a negative storyline, so tourists from all over the world have been flocking in WA’s Kimberly outback to visit the creepy “kill site”.

“People now know the name, and where they might not know the name Halls Creek or Kimberley many are coming and saying where’s this Wolf Creek? The younger people, they’re the ones coming in and saying, “I’ve heard about the movie and I’m a bit scared”. They’re very tentative but they’re excited. They want to go out there and they want to stay the night,“ says local tourism manager Chris Telenta.

The Wolfe Creek meteorite crater is named after an early prospector by the name of Robert Wolfe and it became famous after director Greg McLean used it as the setting for his film, although the movie misspells it and was actually filmed in South Australia.

“The people who watch horror films are often young people and the people who like a bit of adventure and a bit of fun, and they’re the same sort of people who end up being backpackers to northern Australia,” says Dr Gemma Blackwood, lecturer in communications at Charles Darwin University.

The film is a so-called “outback horror” and some say that the main character is the flipside of Mick Dundee from “Crocodile Dundee”. Wolf Creek 2 is due out this week, taking off where the first film finished, with Mick Taylor coming across his latest victims at the crater. You can watch the trailer here.

Telenta is hopeful that John Jarratt, the actor who plays Mick in the film, will visit the town as excitement about the sequel is running high.