Is it a landing strip for aliens? Is it a portal to a parallel universe? Is it an ancient monument to a benevolent deity with a knack for symmetry and design? Nope. It’s a spiral art piece created by modern age human artists. 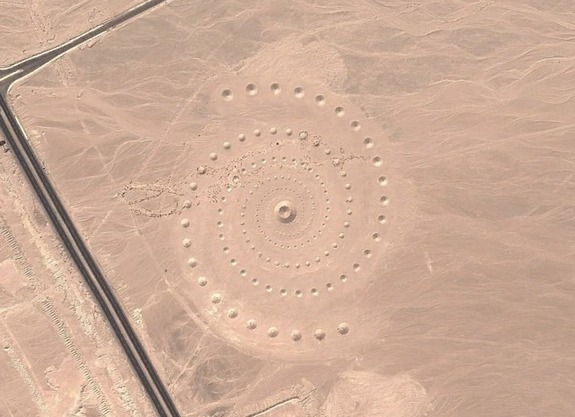 The curious spiral in the Egyptian desert has been baffling people since its creation in March 1997.

An article on Fox News reveals that artists Danae Stratou, Alexandra Stratou and Stella Constantinides worked as a team to design and build the huge 1 million square foot piece of artwork.

The piece is called Desert Breath and it was created to celebrate “the desert as a state of mind, a landscape of the mind,” as stated on the artists’ website.

The artwork basically consists of two interlocking spirals, one with conical depressions, and the other with vertical cones. At first, Desert Breath had a small lake at it centre, but that lake has now emptied. In fact, the whole piece is disintegrating as it is made from sand that slowly blows off, marking the slow passage of time.

“Located at the point where the immensity of the sea meets the immensity of the desert, the work functions on two different levels in terms of viewpoint: from above as a visual image, and from the ground, walking the spiral pathway, a physical experience,” state the artists who claim that they don’t have any political or cult-like aspirations.

Desert Breath is not the only mysterious image that has sparked interest among users who take world tours with Google Earth, Google Maps and other online platforms. There is a five-pointed star in Kazakhstan that baffled users for years before it was revealed that it’s actually the outline of the roads in a Soviet-era park.

Also, there are two enormous diamonds surrounded by a pair of overlapping circles in New Mexico. Some say that this is the site of a hidden bunker belonging to the Church of Scientology. It could be. Who knows?