Facebook and Google reign in mobile advertising, gaining the largest slice from the 105% ($17.96 billion) rise in mobile ad spending in 2013, according to recently released figures from eMarketer. The two tech giants own more than two-thirds of mobile internet ad spending last year. 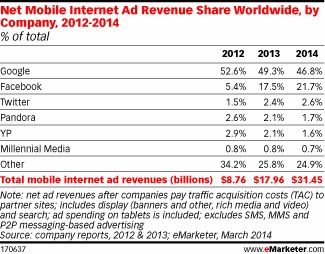 Facebook gained the most from 5.4% in 2012 to 17.5% of the global advertising market last year. The rise created a slight drop to Google, which owns the largest portion of mobile internet ad revenues. Google gained 52.6% in 2012 and went down to 49.3% in 2013. eMarketer predicts Facebook to gain more, while Google will still drop a few percentage this year.

Facebook’s Chief Operating Officer Sheryl Sandberg said in an interview that the result just proves that Facebook’s mobile ad works. Sandberg further hails her company by saying they are “the most efficient.”

In line with this recent success, Mark Zuckerberg, Chairman and CEO of Facebook, Inc., recently sought help from several technology companies for Facebook’s next move to digital advertising — video ads, which according to Wall Street, poses a great threat to traditional TV networks.