Why iPhone 6 is far from Google’s Nexus 4

Upon Apple’s release of its newest iPhones, an image exhibiting a comparison between iPhone 6 and Google Nexus 4, entitled “Dear iPhone 6 Users: Welcome to 2012”, has began circulating on different social media platforms. 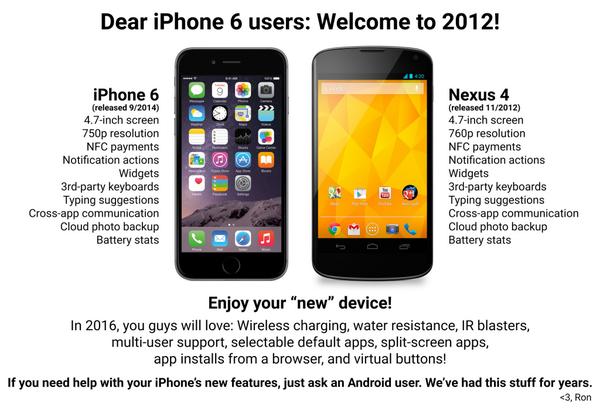 One of the most talked about feature for both smartphones is the NFC tagging. Before Apple’s launch of the NFC feature, several smartphone companies have already released it beforehand, including LG Electronics who created Nexus 4.

The International Business Times UK has stated that although Apple was late for bringing NFC onto their smartphones, their timing was more practical since the feature was not supported by many vendors when it was boasted by Nexus 4 and other smartphones 2 years ago.

In terms of wireless connectivity, Business Today states that “The iPhone 6 has faster LTE connectivity and supports higher download speeds. LTE is short for Long-Term Evolution, commonly known as fourth-generation or 4G technology. Apple claims it supports more LTE bands than any other smartphone. Even for WiFi, it will work three times faster than the predecessor and most other smartphones.”

One of the best features Apple has and the Nexus 4 doesn’t is the Touch ID sensor which is more efficient now with the Apple Pay service since it will be used for authenticating payments.

With all these being said, why wasn’t the Google Nexus 4 the “iPhone” of its time? The reason according to CNET, was because Google “wasn’t terribly good at marketing hardware” and that the smartphones suffers from “not being an iPhone.”