A look in to the newest iOS 8 key features 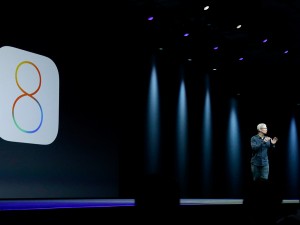 It seems Apple has become more flexible, as it will mark the first time Apple has opened up its mobile operating system to third-party keyboards and widgets, via iOS 8 Extensions. Media apps will also gain more access to the device’s camera. Apple has also unveiled their first original programing language called Swift.

The iOS 8 also comes with new and improved features, some big, some small. But all these changes and adjustments are sure to impact the lives of iPhone and iPad users worldwide.

Although nothing has changed with the basic layout like the fonts, color schemes and wallpapers, there are a few changes to the iOS 8 that makes it easier for the users to utilize. One is replying to text messages or iMessages by simply without having to leave other apps or unlocking your phone.

The Notification Center now supports third-party widgets making it possible for the Today screen to be customized and to display different interactive widgets from other apps.

Changes have also been made to the contacts. By double clicking the home button, a list of your frequently used contacts pops up with a new multi-tasking app view.

In iOS 8, Apple has come up with settings that will tell users exactly which applications and phone activities are draining your battery life.

Users will be able to know which apps not to use or selectively change their settings to maximize their batteries.

Apple’s autocorrect feature has been the topic of buzz over the years, and not in the most positive way. In iOS 8, the keyboard gets a revamp with predictive typing, which suggests several word options as you type, at the same time studying what you’re most likely to say to different contacts.

At the same time, Apple is giving developers the option to create and offer their own keyboards.

In iOS 8, new options will be made available like the three-second timer and time lapse for video, which is the opposite of iOS 7’s slow motion feature.

Also, users can now control the camera’s focus and exposure.

iCloud is also coming up with a native file system similar to Dropbox and Google Drive called the iCloud Drive which allow you to store windows office files and PDFs.