According to MacRumors, Apple plans to stream their October 16 event both on their website and a specific channel on Apple TV. 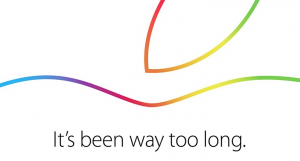 The event will be held at the Town Hall auditorium on the company’s Cupertino campus at 10:00 AM Pacific Time. The invitations for the said event has rolled out with the tagline “It’s been way too long.”

It is anticipated that Apple will launch an updated iPad Air, a new Retina iPad mini and updated iMacs with 27-inch model that has high-resolution Retina display.

OS X Yosemite will most probably have a preview one more before its public launch. Also, rumored update Mac minis might also be announced at the said event.