iOS: Dropbox has modified its services with various new features including iPhone 6 and 6 Plus support as well as Touch ID integration for unlocking. 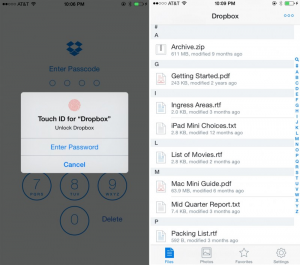 Upon the release of iOS 8, Dropbox has updated to bring forth a new Share extension that enables files from other apps to be viewed and downloaded as well as managing shared folders in the app.

Dropbox is free to download for iOS devices and can be downloaded from the App Store.