Facebook has launched a new feature called “Say Thanks”, which enables a user create a personalised video through combining built-in themes to posts and photos and publish it on one’s timeline. 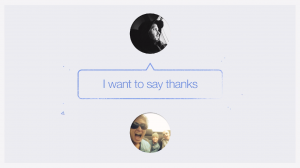 According to Facebook’s blog post announcing the new feature, to create the video, you have to first visit facebook.com/thanks. Then, you have to select a friend, choose the theme you want, and pick out 7 photos or posts that “represent your friendship”.

It is similar to the mobile application Flipagram that lets users combine their own short videos and photos, and share them on their social media. This app topped the Apple App Store during the 2013 holiday season because of its “Year in Review” feature that raised tens of millions at a $300 million valuation.

With this, Facebook decided to try something similar, except with a different take. Instead of the “Year in Review” videos, they opted for “Thanks” videos.

The service is still out today and is continuing to be on desktop and mobile in English, French, German, Indonesian, Italian, Portuguese, Spanish and Turkish.