Nokia has revealed its first tablet: the N1, a iPad-like tablet having a 7.9-inch screen with an aluminium shell, runs on Z launcher and the latest Android Lollipop OS. It has the latest type C USB connector that could be plugged either way and is powered by a 64-bit Intel® quad-core processor. 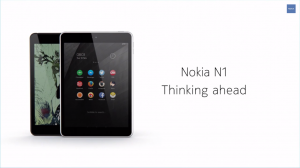 Nokia made use of prediction and scribble to address the clutter interface. Prediction promotes apps, contacts and websites based on how you’ve been using your device. Meanwhile, its launcher has the ability to scribble a letter on the screen that could call up the app you want to use or download.

The N1 – or rather its box – has been teased in Nokia’s Twitter account yesterday. Because of this, some of its specs leaked out all-over the internet the same day.

The 318 gram device also features Gorilla Glass 3 , an 8 megapixel rear camera and a 5 megapixel front camera. It is a Wi-Fi only device and there are no plans yet on expanding it to mobile network.

In partnership with Foxconn, the tablet will be sold first in China for US$249.