The mobile app that everyone should look out for

Gyro Skate is a skateboard game app that scores on the phone owner’s trick skills using gyroscope built into smartphones to power such kind of app. 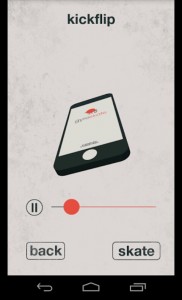 Skills are done through tossing the phone into the air, making it flip and spin on a certain number of times or in a particular direction and then catching it on a perfect landing – or not.

If you are not into the idea of betting your expensive phone’s safety of being crashed into the floor, then don’t make any decisions of downloading this app. Apple has remove Gyro Skate on its App Store to discourage iPhone or iPad users on trashing their devices. According to an article on TechCrunch, Apple won’t just allow such kind of app.

The app makers have included a big disclaimer telling users should play the app over a padded and soft surface; but users would want some thrill right? So, instead they’ll risk their phone’s safety and have some fun.

Only the Android smartphones that have a gyro built in could register a successful tricks.

The developers have made a free demo version of the app so users could first test the app. If you like it and its thrilling effect, you can get the full version in £1.51 at the Google Play app store.