The Microsoft HoloLens welcomes us to the world of holograms 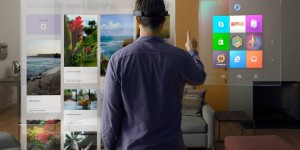 Last week, Microsoft revealed its newest technology in their Washington Headquarters. Sleek and transparent, The HoloLens shows that we are now indeed, living in the future.

The new product involves three dimensional objects floating in mid-air, which basically makes your surroundings a virtual, life sized screen.  Out of all the technology powerhouses, it is the first time we are seeing something this big from Microsoft, leading the pack for the next big breakthrough in technology: holograms.

Years ago, high budget Hollywood films like Minority Report, Star Trek, The Matrix and Iron Man have shown similar and definitely more high tech glimpses of what Microsoft is trying to pull off now, attempting to make those pieces of fiction tangible and in touch with reality.

The HoloLens works as a personal 3D work space, having all the functions of a computer and more just by wearing a piece of unique looking eye wear. It can track user’s movements and whereabouts, transforms what you see without losing sight of your surroundings and can be controlled by hand gestures through a group of sensors.

Like every smart phone or computer device, the HoloLens also has a camera. It faces forward, allowing you to be able to capture things as you see it.

It is safe to say this is only the first of many more futuristic technologies to come for the next generation of tools used for productivity, communication and everything else.