Futuristic urban shoes specially designed to experience what it feels like to walk on the moon. 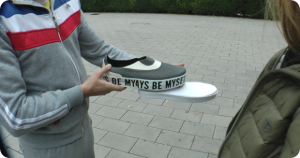 MoonWalker announces IndieGoGo campaign for revolutionary shoes that use magnetic force to simulate feeling of walking on the moon.

Shoe companies have been trying to develop shoes for decades that make people feel light on their feet with pep in their step. MoonWalker may have achieved just that by using a combination of NASA approved fabrics and magnets placed in the sole to develop a truly space age shoe that mimics the feeling of walking on the moon.

MoonWalker made headlines with the announcement of the development of a space age shoe that is unlike any other shoe on the market. MoonWalker has spent years developing the 20:16 MoonWalker and the 20:16 MoonWalker V2; both defy gravity by strategically placing magnets in the sole of the shoe in order to take advantage of the repellent effect.

The 20:16 MoonWalker shoes are sleek in design, lightweight and water resistant. However, the most important factor in these shoes is not the design or style, but what’s inside the sole. What’s inside the sole of the 20:16 MoonWalker shoes is what makes these shoes revolutionary. It’s the magnets. Embedded inside are slim, ultra-powerful N45 Neodymium magnets. These magnets are generally used to lift anything from massive barbells to cars. Strategically positioned in the shoe, the magnets repel each other and push the layers apart. The end result is a force field that keeps you suspended in space. A lot has gone into the research and development of this product. 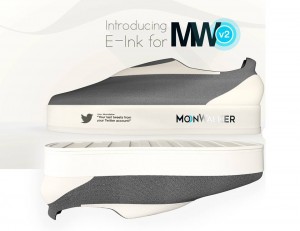 MoonWalker shoes are developed with the idea that everyone should be able to know what it feels like to walk on the moon, not just astronauts. The 20:16 MoonWalker shoes show off an urban design for the men and women on a mission: to conquer the world with their feet. On the outside: smooth synthetic fabric lunar in gray and white gradient, featuring a padded non-slip tongue. On the inside, DuPont Tyvek synthetic polyethylene-the same material used by NASA on their space station modules.

The 20:16 MoonWalker Version 2 shoe employs “smart” technology that can be controlled using a smartphone app allowing it to connect to social media and keep you abuzz of the latest updates. Smart technology being used in shoes has never been done before, and can perhaps reshape the entire industry as health conscious consumers go for the shoes that are “connected”. The company spokesperson for MoonWalker was quoted as saying, “What really matters is the feeling that you get when you wear these shoes, it is simply indescribable!”

MoonWalker has also launched an IndieGoGo crowdfunding campaign in order to raise the necessary funds to begin production on this revolutionary shoe. Sponsors that become involved in the project get first dibs on the 20:16 MoonWalker and the 20:16 MoonWalker Version 2. If you are interested in becoming involved in MoonWalker’s crowdfunding campaign, visit their official IndieGoGo campaign by clicking here. MoonWalker’s official website can be found at http://www.2016MoonWalker.com.