There’s no way you can’t do Facebooking— Facebook reaches everyone. 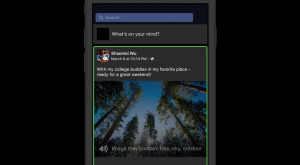 The developer, engineers and other members of the world’s largest social network have been exploring means to make the Facebook platform conveniently accessible for its users around the world. In the course of time, they intend to connect with those who’ve been incapable of using the application but also have the power to engage in latest happenings around the web just like anyone else, such as blind or visually impaired people.

There are screen readers which might alleviate the struggle of users living in black screen, but with Facebook’s AI-powered tool, they can finally visualize a photo included in posts.

‘Artificial Intelligence’ (AI) is a tool which has played a pivotal function in creating such rational devices. It’s evidently tried-and-true in the software demo presentation of Matt King, an engineer and member of the big project, who happened to be partially blinded.

According to Mark Zuckerberg, Facebook product founder and CEO, the AI technology allows them to identify the elements of a photo and to provide detailed keywords to the user.

Then he added, “This is a great use of AI technology, and it’s an important step towards making sure everyone has equal access to information and is included in the conversation. Check out this video to see how it works.”